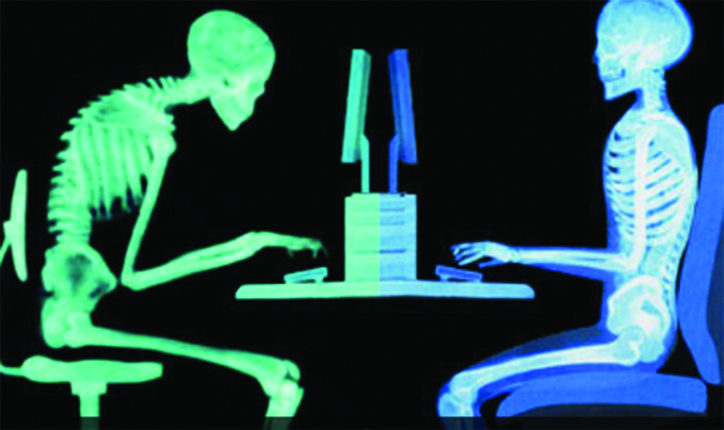 People often come into the office complaining of upper back pain, neck pain, and headaches, which is frequently the result of a postural deficiency known as “Upper Crossed Syndrome”.  Upper Crossed Syndrome (UCS) is described as a muscle imbalance in the upper back and neck, and is commonly exhibited by a forward head, rounded shoulders, and an increased curve to the thoracic spine (mid-back).  More specifically, it is a tightness in the chest and posterior neck muscles (pectoral, upper trapezius, levator scapula, and suboccipital muscles) with a weakness in the upper back and anterior neck muscles (serratus anterior, rhomboids, and lower trapezius muscles.)  This muscular imbalance is what causes those common complaints of back/neck pain, headaches, poor posture, etc. and is often seen in people who work desk jobs, people who drive a lot, and people who often use electronics (cell phones, tablets, etc.)

So, how do you identify UCS?  First, let’s take a look at the postural deficiencies: And, more importantly, how do you fix/correct UCS?

The most important thing is to recognize what is causing the problem/symptoms, and go from there.  Below are some great examples to fixing common postural/ergonomical deficiencies.  Secondly, you should work on stretching out the areas of restriction and tightness, such as the pectoral, upper traps, and suboccipital muscles, and work on strengthening the areas of weakness, such as the serratus anterior and rhomboid muscles.  It will not only improve your posture, but it will also help decrease the common complaints of pains in the upper back and neck.